They came to our garden for the first time last year, late in the spring.  We got so excited when we saw them checking out the bird-houses we had put up in hope of attracting Bluebirds.  Didn’t expect them to take up residence since they always stayed so high up in the sky. Settling in wasn’t so peaceful either.  The pest, as all the gardeners and birders know, the House Sparrows, tried to steal the house.  Actually the Sparrows were trying to take every single house in the garden.  We, especially I, were never going to let it happen. I kept checking every house like a nut case, after seeing the Sparrow going in and out.  I became a home-wrecker,  demolished every single House Sparrows’ nests that ever built in the birdhouses. We did trap one sparrow, insistent on declaring sovereignty over one birdhouse, by clapping a gloved hand over the opening until the “Havahart” trap could be pushed up to the opening.  He swooped out and into the cage.  We released him 20 miles north.  In the end, the swallows turned out to be feisty enough to defend their own property.  We watched as one day, a swallow grabbed a heckling sparrow in mid-air and slammed him into the ground.  Unhurt but rattled, the sparrow left them alone after that. 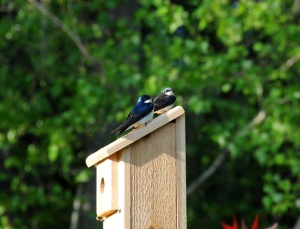 They are back early this year, early April when the air is still cold.  Straight back to the same old house they nested in last year.  They didn’t take long to check the other houses on the premises.  Apparently the same house has good memories.  The kids 1st pre-masticated bug.  The kids 1st singing lesson.  The 1st lawn party, ..wait, wrong memory.  There are, by our casual count, at least two pairs of swallows in the neighborhood this year.  We presume the 2nd pair might be last years kids, but they are arguing over property so we can’t be sure.

We did put up a 2nd bird-house about 15 feet away from the currently occupied one.  That was the official ‘bird book’ distance.  But the primary swallows make sure they buzz anyone that tries to inspect the real estate.  We’ll have to move that house further away.

Meanwhile, we await the return of the hummingbirds and hope that the wrens nest again this year in the backyard.  The Cardinal family that nested in one of the rose bushes had a maternal fatality that ended the kids future before they had fledged.  Hopefully they’ll try again this year, close enough for us to watch.