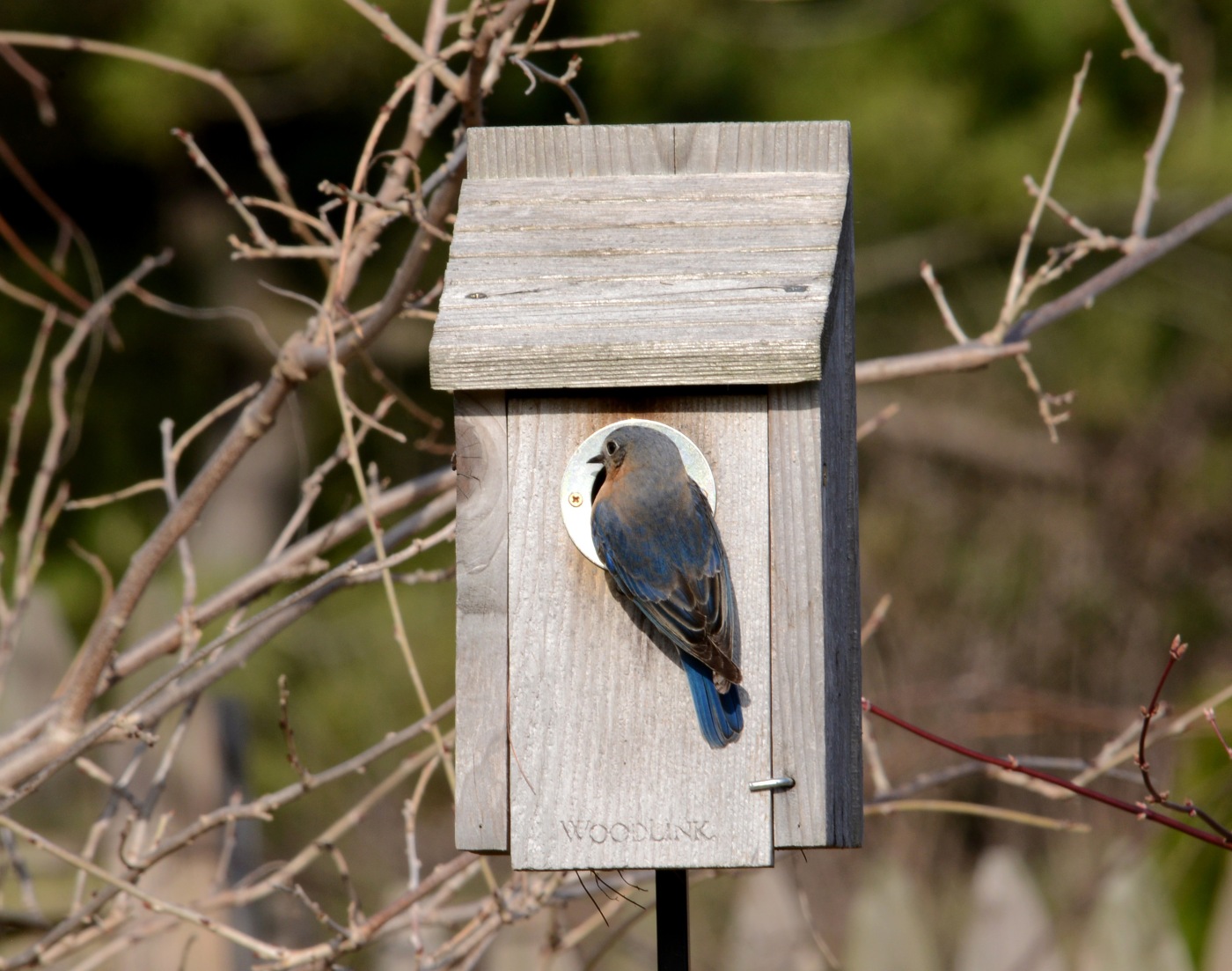 However bad this last winter was, the Eastern Bluebirds (Sialia Sialis) elected not to leave us for warmer digs down south.  Maybe because we provided everything they needed here: food, water and places to roost inside from the cold wind and snow.  This last winter was the first time that they were really present on an almost daily basis.  Once the weather started to get warmer, they started to seriously look for a place to nest.  From an initial flock, there are only four left now.  They have made their territorial claims.  I don’t know whether the pair that is nesting in one of the nest boxes now is the same pair that nested in there last year.  I was unable to find any information on whether they try to nest at the same place every year as the Tree Swallows do.

Last Sunday, Easter Sunday, I spent all day in the garden.  Aside from doing the usual garden chores I also checked on the new residents.  Who’s just come back, who’s nesting where and also monitoring the House Sparrows (Passer domesticus) at the nest boxes.  The American Robin (Turdus migratorius) is still battling his image in the bay window on a daily basis.  A female Northern Cardinal (Cardinalis cardinalis) is building her nest in the front Azalea.  Two pairs of Tree Swallows (Tachycineta bicolor) are taking up residence in two of the nest boxes, one of which is the same as last year.

In the end, to my surprise, I found my favorite Easter eggs.  A pair of Eastern Bluebirds have laid four beautiful blue eggs.  I hope it’s not too cold for them at night (still below 40ºF most night) for them to hatch.  I hope to see them start bringing food in for their young in a little over a week.  And then, start a second brood…

One thought on “First Family of the Year”

Reading an article by Aleks Krotoski in BBC Science Focus magazine on the way down to the city prompted me to reread The Gardener’s Year by Karel Capek again. It’s one of the most humorous and wonderful accounts of a gardener’s year, month by month. Most of us gardeners can see ourselves in this book. #gardenersyear #karelcapek #gardenbook #bbcsciencefocus #alekskrotoski #gardenwriting #bookaboutgarden
Foggy reservoir. There’re still plenty of ice and snow on the reservoir but no ice fishermen this morning. #reservoir #fog #morningfog #winter #nature #winterscape #latewinter #nysreservoir
Starting March with a heavy fog morning. Only thing missing is a headless horseman. #morningfog #fog #winter #latewinter #sky #morningsky #backyardgarden #nature
He/she is back this morning. Now we have two talking to each other from two different trees. #hawk #birdofprey #coopershawk #backyardbirds #birdsofnorthamerica #birdsinwinter #nonmigratorybirds
Sign of spring’s coming soon....daffodils emerging from their nap. The majority of our garden is still covered with snow but a new life cycle has started in the area closer to the house. #daffodils #spring #springflowers #backyardgarden #earlyspringflowers #perennialflowers #perennials
Spring is just around the corner when we start to see primrose at the farmers market. These primroses are for sale at Union Square Farmers Market today. #primrose #primroseflower #earlyspringflowers #farmersmarket #unionsquaregreenmarket #perennials #plantsforshade #plantsforshadearea #backyardgarden #nycfarmersmarket #primula