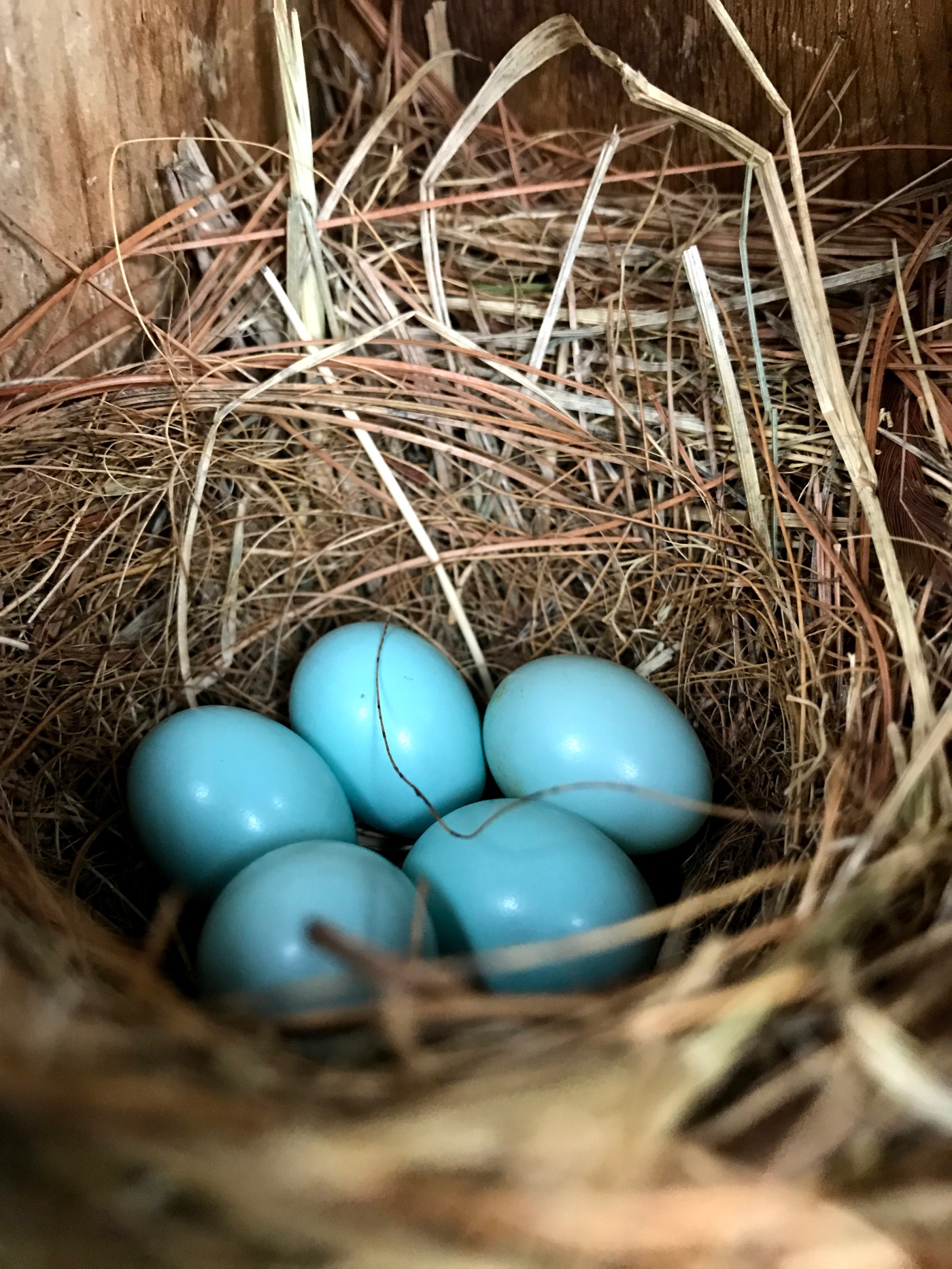 One of my fellow bloggers asked me recently how the Bluebirds fared this season.  A light bulb went on in my head how about a recap’ of this past breeding season?  The Eastern Bluebirds (Sialia sialis) have done quite well.  To our surprise, they have raised three broods this season however the broods may not be of the same pair.  I know one pair has raised two broods since their chicks were allowed to hangout by their new nest box when they started the second brood.  But the third which nested in the front yard nest box later in the season didn’t have any chicks around.

Below is my progressive observations of the second brood.

In the years past, we have only observed Bluebirds raising one or two broods at the most.  Then to our surprise & excitement, we discovered a third brood in the front yard.  I have seen the Bluebirds on this nest box a few times but have also seen House sparrows (Passer domesticus) on it too.  The vicious House sparrows zoom into their nests, peck & break their eggs & will not let them have any peace.  However when we tried to trim the hedge by the nest box, the Bluebirds wouldn’t leave the area so we checked the box.  Bravo! What a pleasant surprise and hedge trimming was immediately suspended.

I don’t know how many of the chicks from these three broods have survived to adulthood.  What I do know is that we hear more of their calling in the air, around the yard, than years ago.  They  come to the feeders and baths year ’round.   They also look for places to roost in our garden in winter.

We have not yet had a heavy snow.  We will see more of them once the ground is covered with snow and the lake is frozen over.  I think they decided to stick around in winter because we have food, heated bath and warm places to stay.  We pretty much rolled the red carpet out for our avian friends.  The only exception is House Sparrows….for this bunch, it’s war.

8 thoughts on “A Recap’ of The Breeding Season”

Getting ready for two nights of deep freeze. Any plants that are small enough are packed in the garage. The ones that are in the ground but have sprouted leaves, like the twin kiwis and Fred the fig, we bundled up. They look like mummies in the garden now. #kiwi #coldhardykiwi #fig #figplants #growyourownfood #growyourownfruit #protectfruitfromfrost #springgarden #backyardgarden
This morning sky. The storm is coming and the temperature is expected to drop to 30F tonight. We might have snow😩#morningsky #sunrise #skyscape #cloudscape #nature #clouds #sunray #morningsunrise #cloudphotography
Repurposed an old nest box into a home for native bees. #beehouse #nativebees #savepollinators #pollinatorgarden #pollinatorhabitat #pollinatorfriendly #nativebeehouse #nestbox #diybeehouse
The Cedar Waxwings are back! #birds #cedarwaxwing #cedarwaxwings #migratorybirds #backyardbirds #birdsofnorthamerica #birdsinspring #birdfriendlygarden #ivy #ivyberries #waxwing
Roses are red, violets are NOT just blue 😁 But the blue ones are great for making a beautiful and tasty jelly 😋Hardly wait for more of them to bloom. #violet #blueviolet #whiteviolet #groundcoverplants #edibleflowers #nativeplants #flowersforpollinators #pollinatorgarden #springflowers #pollinatorfriendly #edibleplants
Good morning ☀️watching sunrise is always a meditative and uplifting way to start a new day, new week. #sunise #morning #morningsun #skyscape #sky #nature #naturephotography #skyphotography #meditationonsunrise